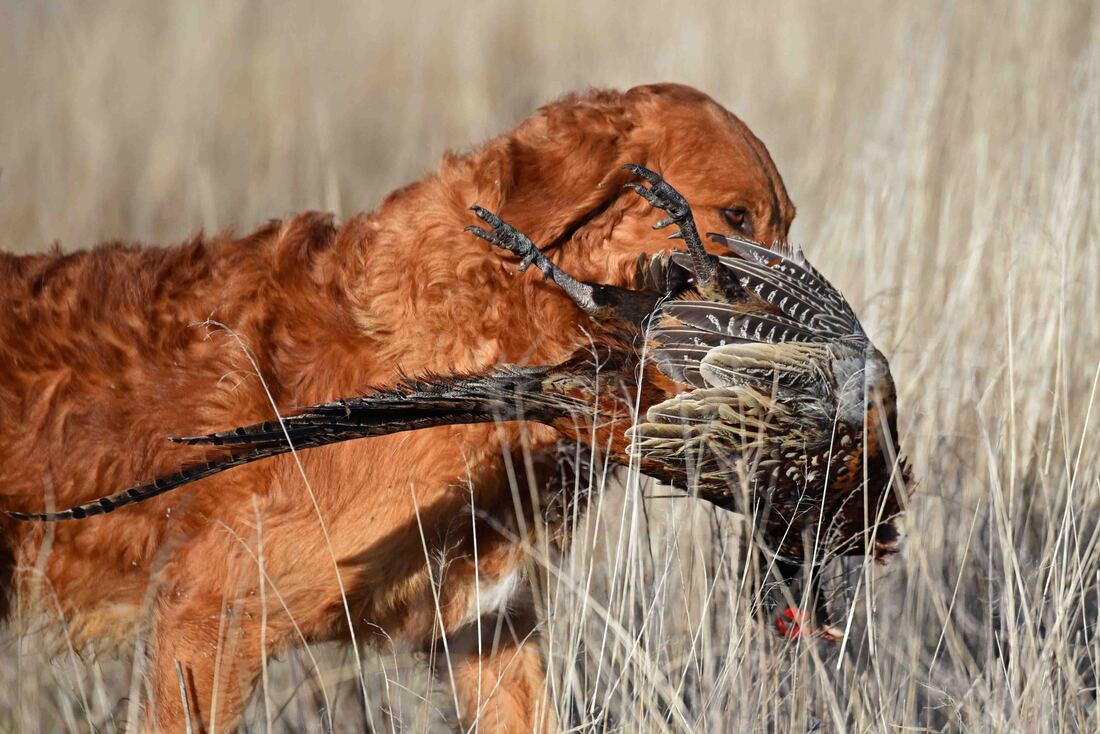 ​Description
For over 30 years Eph's lines have been bred to optimize the classic golden retriever as a hunting partner. This includes; scenting ability, love of the water, cold-hardiness, athleticism, the desire to find game. The owner's job is to bring out the dog's natural ability, hone it, and make it applicable to the kind of hunting the dog's intended to do. If your looking to add athletic, nimble, very focused, excellent water attitude and 32 years of gun dog breeding you found the right stud.

Traits
About his name:
The grizzly bear from the Cache National Forest known as "Old Ephraim" was first identified by his distinctive 3 toed tracks. The massive grizzly bear lived within a wilderness area from as far north as Soda Springs, Idaho to as far south as Weber, Utah, before settling in Logan Canyon, about 20 miles east of Logan, Utah.

"Old Eph" is a name used in many frontier folklore including several deer hunts and scout camps.

“Old Ephraim” was a legendary, giant, marauding grizzly bear who roamed the Wasatch Mountains in the early 20th century. Almost 92 years after his death, the bruin still lives on in campfire tales and various tributes.
For example, in Bear Lake Valley, there’s the Old Ephraim Pizza, 32 inches in diameter; in a remote side canyon of Logan Canyon, there’s a large stone monument where he was killed; and “Walking Thunder” (1997) was not only one of actor/singer John Denver’s last movies, but was inspired by the tale of Utah’s Old Eph himself."

“Grizzly bear killed near Logan” was an Aug. 22, 1923 headline in the Standard-Examiner, reporting on the bear’s demise.

“The largest grizzly bear that was ever known to inhabit the Wasatch Range is reported to have been killed in the Right Hand Fork of Logan Canyon by William (Frank) Clark, a sheepherder,” the story stated. The bear was believed to have killed as many as 15 sheep in one night and Old Eph was indeed possibly the largest and most elusive bear ever in the Beehive State."

The name is special and so is the dog:
"In a market flooded by goldens with dubious field credentials, finding a solid gunning companion is like finding the proverbial needle in a haystack." Unless you've met Erica. I consider Erica Christensen to be one of the foundational breeders of today's hunting golden. Over the last 30+ years, her work has focused on perfecting the golden gun dog.  Erica was involved with the original AKC steering committee for the hunt tests credentials. Just  one of her many influences on the American golden retriever. Picking up Eph in Colorado December 22, 2020, Pixie's last litter, daughter of Bree, was a dream come true. Bree is one of the most gifted hunters Erica's had in those years.  Those that know her program also know that she breeds wavy or curly coated goldens. Eph is an iconic throwback in the golden retriever foundational pedigrees. His curly coat is as unique as he his. Many golden history buffs have assumed that the curl had come the early Tweed water dog ancestors. However, some think they came from his more immediate ancestors, Tiverton Best Lad and Rajah. Either way, 30 + years of gun dog genetics and over 150 years of recessive curly genes are roaming the mountains and valleys of Cache County. He's everything we hoped for and more.
Copyright © 2013.  Windmill Farms.  All rights reserved.  |  Website by jernibox