Where did the Windmill Farm's name come from? 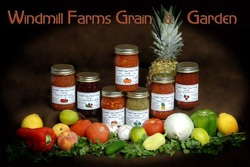 In 2004 our computer was ready to give up. As the kids were entering middle school, the need for a new computer was apparent. I was looking for a way to help teach my children the importance of work and needs.  I started a small family based business for my kids in an effort to help earn money for a home computer. We started selling  homemade jam and salsa products Saturdays at the local farmer’s market. Later we expanded and moved to the Ogden, UT farmers market. We then started distributorships throughout the state.  The whole family participated in the labeling, website design, advertising and distribution channels. Interest in the uniqueness of the products exploded! Within 3-4 years management from Western Family Distribution center contacted me with high interest. I negotiated a distribution contract with Western Family Inc, the 3rd largest food distributor in the Western US. We garnered distribution to over 283 stores. Three computers later and the development of new products, sales accelerated beyond anything I was prepared for. After 8 years, I sold the business and distributed the earnings to their college educations. It was an extremely positive family business experience that we built from the ground up.

“Cache County, located in the northern part of the state, is bordered by the Wasatch Mountains on the east and a spur of the Wasatch, the Wellsville Mountains, on the west. The Bear River flows through the northwestern corner of the county where the Little Bear, Blacksmith Fork, and Logan rivers add their waters to it. Cache County was formed in 1856 by the territorial legislature and its boundaries were redefined in 1864 when part of Cache became Richland (Rich) County.”

“Northern Utah was part of the Plains Culture area and, later, Shoshoni territory. Between 1824 and 1855 Cache Valley was repeatedly visited by trappers and explorers. Among the early trappers in the area were James Weber and Jim Bridger in 1824 and Peter Skene Ogden and James Beckwourth in 1825. This Valley became an important rendezvous and resort for fur traders.  James Bridger was one of the greatest frontiersmen of Utah and American history. During his lifetime he was a hunter, trapper, trader, and guide, and one of only a few trappers to remain in the Rockies after the demise of the fur trade.” http://historytogo.utah.gov

My thoughts on Hunting vs. Retrieving

2010- Mike and I had just started hunting when Gus flushed a nice rooster. He stayed low then cut sharply behind us when Mike’s shot folded and dropped him into a large patch of weeds and grass. We started calling “dead bird” out to the dogs as we all hustled over to the location.  The bird was gone, nowhere to be found?  The four dogs, 2 dads and 2 boys started looking under the growth.  After 5 minutes, enlarging our search area with each pass, we all came up blank.  It was then; I noticed that Sheila wasn’t present in our search party.  I called out to Mike to see if she was over in his area.  “Not here” he replied. I then called out to the boys to see if she was over where they were looking? “Not here” was again the reply.  After a couple of whistles she suddenly appeared about 30 yards away bordering an adjacent hay field separated by a barbed wire fence. In her mouth was what we were all looking for. I stood in amazement for a minute wondering how and why she figured it out.  As near as we could deduce, her mark was precise, after arriving at location she began hunting the bird which quickly ran directly away from us.  She found the scent and run him down in the adjacent hay field.  Is it genetics or training? Both? Why do some dogs just get the hunting part so well?  Sheila has been trained to a JH/SH level. She doesn’t have a title in the HT or FT arena. She has never been forced fetched, but delivers to hand. She’s never been professionally trained to upland hunt but quarters nicely and hunts close.  She’s doing everything I ask….naturally. I don’t know all the answers, but I would rather work with a dog that wants to do the things they are bred to do naturally, rather than forced.

Philosophy
Bottom line, we hunt our dogs. They MUST naturally love the game and love to get in the thick stuff.  In some cases they'll work up to 200 birds per year. From the mountain maples to the thick cattails our dogs must perform at a high level.  There is something very special about a well trained, quality hunting dog. Golden Retrievers have some of the best noses and through selective breeding, they are as good or better as any other breed I've hunting with. Coupled with a terrific bedside manner, they are great all around companions. The success of our future golden retriever populations falls squarely on the quality of the sires and dams used with each new generation.  Their degree of excellence is expressed in the earned titles, field work, conformation, attitude and health. The history of the golden retriever began around the early 1900’s in Scotland, with the original intent of developing the perfect hunting dog for both sport and sustenance. With meticulous record keeping, a handful of people like Sir Dudley Marjoribanks, a British aristocrat who later became the first Lord Tweedmouth, from Brook House, Park Lane, London dedicated their lives in the development of this breed. While careless & rampant breeding happen in earnest today, there are many breeders that continue the original intent while adding sporting breed qualities. Powerful, active dogs, that are structurally sound and well balanced. Golden retrievers possess a personality that is eager, alert and self-confident. Any breeder becomes a steward & contributor to the outcome this wonderful breed. As such, methodical consideration should be given to each new life. According to the AKC the Golden Retriever is a Sporting Breed. They love to work with a “Give me a job” attitude. Sure, goldens make great family members, they're great with kids and are highly trainable. Because of their versatility, many people are proving how much more they can become. Goldens are excelling in agility trials, as impairment companions, rescue dogs, hunt trials and field tests. We keep these goals in mind with any new litter.  Besides all this, they love to hunt. The opportunity for most folks to hunt, train or prove this fine breed is diminishing or difficult logistically.  Today’s Hunt, Agility and Field test programs offer a wonderful option and are set up to prove dog & owner capabilities. Fortunately, we have family members that own or have access to 100’s of acres of prime farmland in Northern UT. It’s where the rubber hits the roads for us as find to out what kind sporting bred dogs we really have. We hunt and train on wild birds in all kinds of terrain. Young dogs are trained at bird ranches giving them confidence with each success. Obedience and desire are a must. Wanting the best multi-purpose golden retrievers means breeding to the highest quality field and obedience studs available. Our goal with each litter is to produce golden retrievers with desire, trainability and easy to live with temperaments. We look for dogs with classic field bred conformation & drive. Meaning pups will have good bone alignment, deep chests, agile, go all day, athletic bodies. Good health is of utmost importance to us, therefore, both parents will have their health clearances. Best of all, regardless of how you use them, they’ll be wonderful members of your family. Puppies will be well socialized and include a puppy pack with pedigrees and other helpful information. They will be vet checked, wormed and vaccinated. The goldens' desire to please is legendary-making them a top obedience competitor and first-rate companion.

Retrieving desire: Dogs have different degrees of interest in retrieving. Greater the drive, then the greater the chance of overall success in training and competitive performance. One can have pulsating drive but if paired with a lack of intelligence or a low degree of tractability, then the dog will probably not be successful.

Intelligence: Dogs, like people, have different levels of intelligence. The smarter dog progresses more quickly in training and also retains more than one who has a lesser degree of native intelligence.

Tractability: This is a very important characteristic of the elite retriever. The ideal dog should be easy to control and be malleable. I have come to understand the importance of this attribute. The opposite of tractability is stubbornness and a dog that is prone to be dishonest and purposefully look for ways to defy the instructions of the handler.

To make this happen, you MUST spend the time with them!
Copyright © 2013.  Windmill Farms.  All rights reserved.  |  Website by jernibox